Using a single trapped ion, we have experimentally demonstrated state-independent violation of a recent version of the Kochen-Specker inequality in a three-level system (qutrit) that is intrinsically indivisible. Three ground states of the 171Yb+ ion representing a qutrit are manipulated with high fidelity through microwaves and detected with high efficiency through a two-step quantum jump technique. Qutrits constitute the most fundamental system to show quantum contextuality and our experiment represents the first one that closes the detection efficiency loophole for experimental tests of quantum contextuality in such a system. 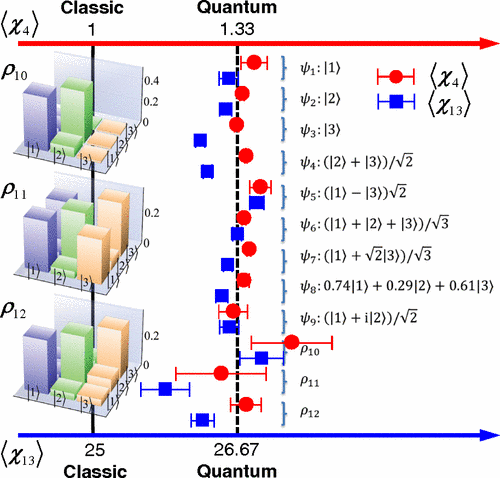 State-independent test of KS inequalities for a qutrit system. The inequalities are examined with eleven different initial states including simple product states ψ1 to ψ3, superposition states at the axis of the observables ψ4 to ψ6, outside of the observables ψ7 to ψ9, and mixed states ψ10 to ψ12. We measure the density matrix of all states by performing qutrit state tomography and confirm the prepared states with an average fidelity 99.5% for the pure states. The mixed state fidelities are around 97%, shown in the figure. All raw measurements shown as blue filled squares violate the classical limit 25 by 11.2σ, confirming the quantum contextuality for various states. For each state, 480 000 realizations are used to obtain the result.